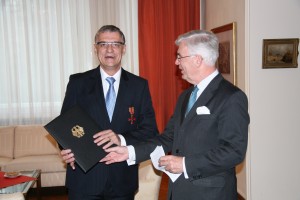 The high distinction was offered to Peter Simon by the President of the Federal Republic of Germany and it was handed over to him on December 3, 2008 within a festive ceremony, by H.E. Mr. Roland Lohkamp the ambassador of Germany to Bucharest.  H.E. Mr. Lohkamp emphasized on this occasion Peter Simon’s special role and that of the German Economic Club as a platform for information and expertise exchange between the German companies inRomania. 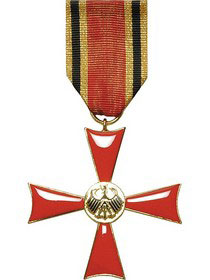 Federal Cross of Merit with Ribbon

In close cooperation with the Romanian-German Chamber of Commerce and Industry and with the Economic Department of the German Embassy in Bucharest, the German Economic Club organized over the past years very efficient and highly appreciated business meetings, thus offering the German investors a “vital” support.

In this sense, Peter Simon’s initiative to found the German Economic Club represented a cornerstone in the development of the Romanian – German economic relations, helping Germany to become Romania’s No.1 commercial partner.

”I am honored to receive such a high distinction and at the same time, I would like to specially thank all my collaborators and partners, without whom this success wouldn’t have been possible.” –  said  Peter Simon

Peter Simon has been the President of the German Economic Club for 13 years and the Country Manager of ABB Romania since 1997. Since 2007 he is Country Manager for ABB in Romania, Bulgaria and the Republic of Moldavia.

You can take a look on the video from the ceremony here: